On a seemingly simple mission to retrieve some questionable material, we're introduced to our first look of our protagonist Avery Chase - a space man doing the hard and dangerous space jobs for hard earned space cash. This first mission sets the scene for a wild ride completely manipulated by one single instance  that will have consequences much larger than anyone would like to imagine.

Though each episode has a resolution of its own, reading through them collectively will paint a better picture of the overall universe. What better place to start from than the beginning?

This episode contains 24 pages to begin the saga of Avery Chase.

Enjoyed the comic? Want to see more behind the scenes? Consider supporting its production via Patreon and gain immediate access to all my available works! Link provided under the "More Information" tab below.

In order to download this comic you must purchase it at or above the minimum price of $6 USD. You will get access to the following files:

Cowboy Bebop was always a big inspiration for me, and thought it would be cool for Avery's first ship to be inspired by it (a mix between that and the first ship I got in NMS). I take it that you don't like it?

The visuals and colours are great! Loved the drawings :) I found the font a bit difficult to read, but overall very nice!

Thanks! Lettering is one thing I still struggle to do sadly lol! Hopefully, with more practice I'll be able to write a legible font. Glad you were able to enjoy it despite the fact!

Loved the characters right away! The art is great and the comic is an easy read.

Nice comics !!! I absolutely loved the colors and the chara designs :)

This is... excellent! You've clearly put a lot of thought into the character design, and I love the colors and overall drawing style.

Aww thanks! I do enjoy character design most out of everything - so I'm happy you've liked that aspect so much!

The visuals and panel layout are a masterpiece!
Dino is a fun foil. I like how ze teases Avery for chickening out on something that ze can't do anyway.
I enjoyed the worldbuilding, but there is not enough 'show, don't tell.' in this first episode. Especially the reference to 'clicks,' would be improved by just integrating the money context into the dialog. For example, Avery: "five clicks was a lot of money for us back then!"
I had trouble reading the font, though it got easier by the end. I also would have preferred an e-reader layout as opposed to the print layout.

Thanks a bunch for such an in depth comment! I know I'm replying to this 2 years too late but when I read the comment initially it really stuck with me, and has made me consider it in a lot of things I create now! I hope you'll enjoy future epsiodes when they (eventually) arrive!

The writing could be tighter but your artwork shows a TON of promise. Well done.

Thanks! When I started this my experience with writing was preeety lacking! But having the feedback has since helped me consider how to approach things differently and hopefully enhance future episodes. 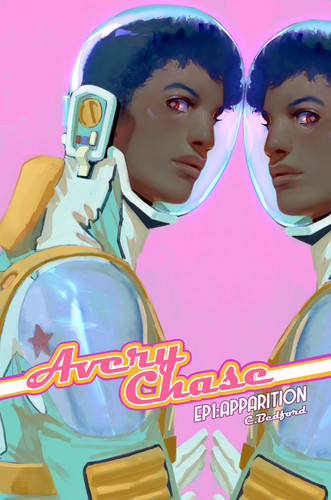 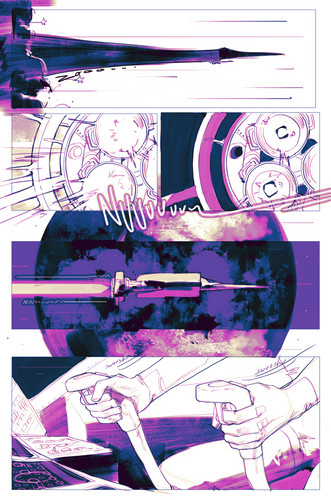 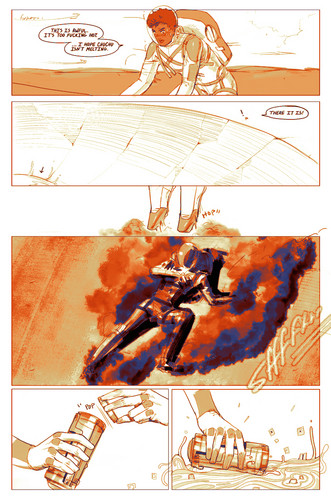